From February 28th to March 3rd, the Mobile World Congress 2022 (MWC) hosted The European Quantum Space, a zone dedicated to showcasing the innovation and development in Quantum Technologies that Europe is driving forward. The 70m2 space exhibited the latest achievements and advances in the field of quantum technologies for three main areas: The Quantum Flagship, Regional Initiatives and Start-ups/Companies, all mainly focusing on quantum communication and computing, two of the areas of major interest within the field.

Surprisingly enough, many attendees were aware of the emergence of quantum techs and how they are driving a new wave of technologies that are going to shape, somehow, the future of our society, by changing the way we see things, interact and communicate. Some were really interested in learning about the flagship and the underlying projects’ achievements, the emergence of European regional initiatives, such the Quantum Valley Lower Saxony, from Germany, and QuantumCAT, from Catalonia, and others were interested in real gadgets and tangible products and thus wanting to see what the five quantum communication and computing companies, IQM, LuxQuanta, Qblox, Qilimanjaro, Quside, were bringing to the event, of interest to the telecommunication audience, core to the mobile ecosystem that the MWC brings together.

In addition to those with more know-how, those that came to the stand to hear for the first time about quantum technologies were eager and enthusiastic to understand what these actually were, how they could help further develop the mobile ecosystem and technologies in general, what was being exhibited in the stand by the companies, and how the technologies they were developing could be found already on the market to improve existing ones.

"For the mobile industry, the greatest impact will be related to a new secure foundational internet connectivity that will be brought to us by quantum communications technologies." JAYA BALOO / CHIEF INFORMATION SECURITY OFFICER (CISO) AT AVAST SOFTWARE AND VICE-CHAIR OF THE QUANTUM FLAGSHIP STRATEGIC ADVISORY BOARD

All in all, over 200 professionals stopped by and engaged in insightful conversations with the flagship representatives present at the event. On behalf of the Quantum Flagship, Jaya Baloo, Chief Information Security Officer (CISO) at Avast Software and Vice-Chair of the Quantum Flagship Strategic Advisory Board, participated in the MWC discussion panel “5G Security: A New Threat Landscape”, and emphasized during her visit to the stand that “quantum technologies will have a deep and profound impact on the way that we conduct our daily lives, both in the digital and physical realm. For the mobile industry, the greatest impact will be related to a new secure foundational internet connectivity that will be brought to us by quantum communications technologies. This aspect, which is a dream for any security professional as myself, will allow us to accomplish what is called defense in-depth, a hybrid network where we will be able to fuse quantum communications, quantum key distribution and even post quantum cryptographic techniques to give a much more solid layer defense against any potential attack.”

Quantum technologies are slowly unfolding and showing the potential to become a game-changer in the future of our society. With the results seen this year, the flagship aims to be present next year, at MWC23, and broaden the frontiers of quantum techs by aiming to showcase a larger variety of technologies already on the market and that can benefit the telecom arena, as well as other trailblazing technological companies that seem very eager to become end-users of this technology. 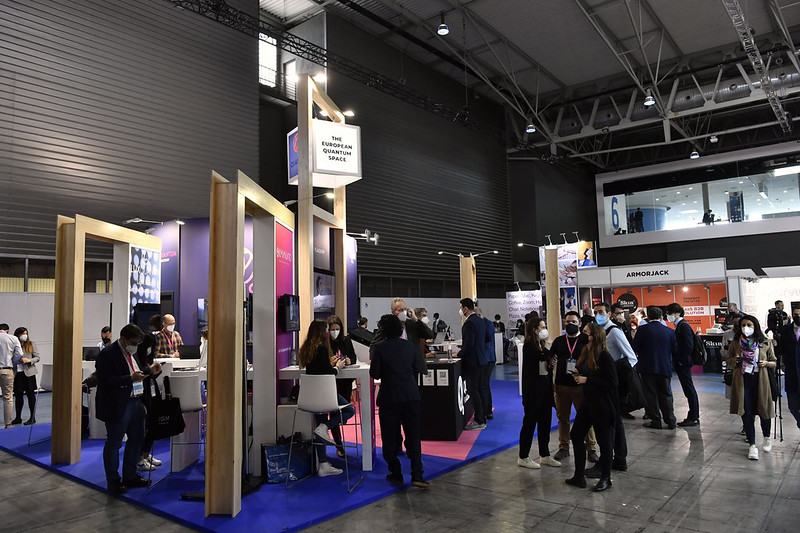 Click on the following link to view the pictures of these really exciting four days full of new and long awaited back to normal in-person interactions and conversations.

Stay tuned for next year’s MWC23!